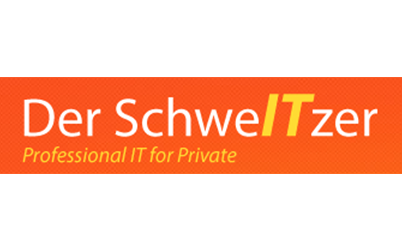 Der SchweITzer provides professional IT solutions based on Synology products for private customers, small and medium-sized businesses. With many years of experience of building complex IT infrastructures, Der SchweITzer offers a wide range of services including File Server, Contact Server, Media Server and Calendar, Surveillance Station, Mail Server as well as Active Directory Server based on Virtual Machine Manager. Those services are implemented into the network structures with the help of segmentation by means of VLAN/Firewall.

Der SchweITzer was given a task by a medium-sized service provider to create its IT infrastructure within its own premises instead of any external cloud providers. Therefore, Der SchweITzer created an IT environment for a classic business office with the use of common services such as central File Server, Mail Server, Calendar and Contacts Storage, Media Services and Surveillance.

In addition, to meet the ever-growing storage needs while minimizing the initial investment required, Der SchweITzer was not only compelled to maximize storage utilization but also expected a solution that is versatile and expandable for future demands. Moreover, Der SchweITzer was seeking for a system that supports high-availability to minimize downtime as well as a powerful tool to easily manage the privileges of domain users and groups.

Der SchweITzer had implemented Synology Plus and FS & XS series products in small projects before and they worked well without interruption. Therefore, after a thorough evaluation, Synology Virtual Machine Manager (VMM) was used to meet the requirements for scalability, on-demand resource allocation and high availability.

The storage system is deployed based on the four RS3617xs+. Two of them take over the tasks for VMM Storages with ten Seagate IronWolf Pro NAS- hard disks respectively (one is used as Hot Spare) and two Kingston SSDs for read/write-cache. The other two RS3617xs+ servers - later referred as "Workers"- work as Mail server and hypervisor for Virtual Machines with four Seagate IronWolf Pro NAS, two Kingston SSDs as read/write-cache and one RAM-expansion to 64GB.

In addition, the deployment is completed by one central stack with two switches and one cluster with two firewalls. The "Workers" and storages use virtual switches for VMM internally, whereby every two of four physical NAS interfaces are redundantly connected to both Switch-Stack-Members by means of Link Aggregation. This VMM connection between the Synology system and the central switch also serves as VLAN-Trunk. This way it provides redundancy in the event of unexpected system failure and increases data throughput. On the other hand, network separated by VLAN on layer 2 and routing firewall on layer 3 also protect the server from unforeseen accidents.

Both Workers build one MailPlus Server cluster. In addition, they host five virtual systems by means of VMM.

Thereby the virtual systems are stored on the VMM storage and can be migrated between Workers at any time.

Four out of five virtual machines are Synology vDSMs. The first vDSM provides administrative services such as Synology Active Directory, DNS, DHCP and NTP. The second vDSM acts as a file server. The third one is used for Calendar and Contacts while the forth is running Surveillance Station.

Additionally, there is a virtual Linux appliance works as centralized antivirus server to protect the clients from viruses. The separation of the services through multiple virtual machines makes the best use of available resources. When certain events or errors occur, one of the VMM Storages will take over the additional administrative services, such as CMS and HyperBackup Vault, for all physical and virtual DSMs to ensure service continuity. 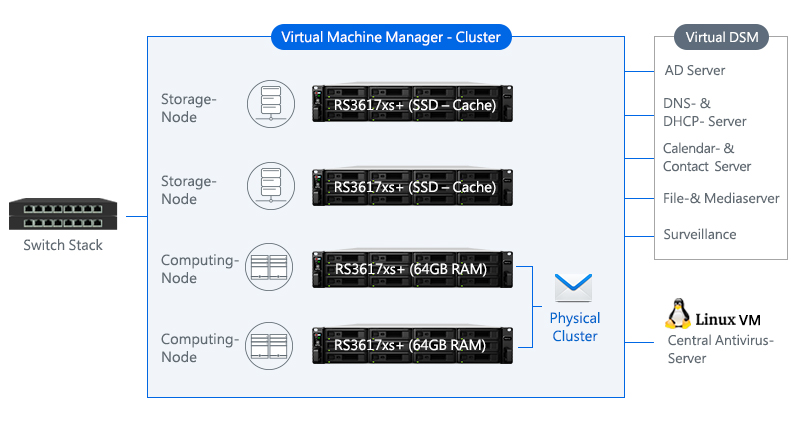 The Virtual Machine Manager enables fast adjustment for improving hardware infrastructure. Also, the interface allows the user to add additional virtual CPUs to a vDSM, expand virtual RAMs, adjust network adapters, add volumes or increase the capacity of an existing volume within the hardware resources of VMM hosts. In addition, the VMM allows the system to grow through exchange or addition of further VMM compatible hosts – without downtime of vDSM or migration process.

Applying the high-performance enterprise-class NAS hard disks on one hand and SSD-based cache on the other hand allows servers to reach high data throughput that is being completed to Switch Stack with Link Aggregation of the virtual switches of VMM Hosts.

Virtual Machine Manager brings efficient management capabilities to run Virtual DSM and ensures high availability in a cluster. The availability for the MailPlus service is increased by means of its own cluster. In the case of a single network component failure, the dual connection of virtual switches will take over to maintain the network connection, ensuring seamless transition between clustered servers.

With VLAN tagging and firewall settings, users can easily and quickly switch and apply the desired profile according to different security needs. The BTRFS snapshots of the vDSMs provides additional protection against the event of hard drive failure, data loss and memory or storage errors.

The intuitive operating interface of Virtual Machine Manager enables a simple administration of virtual systems,  fast overview of the status and resource requirement of the host and vDSMs.