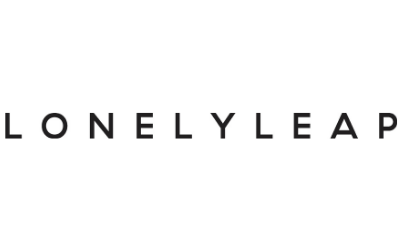 "In a difficult context brought about by a pandemic and lockdowns, Synology were able to solve a complicated equation." Joakim Olsson, Technical Director, Lonely Leap.

Lonelyleap is a multi award-winning production company with offices in London and New York City. Independently owned, their team of strategists, directors, cinematographers, designers and producers is highly international, and work with high-profile brands both in the Corporate sector as well as news outlets and major broadcasters. Beyond advertising, Lonelyleap  aim to create films that inspire, provoke and educate through cinematic filmmaking, heartfelt testimony and intimate storytelling.

Lonelyleap were using a direct-attached fibre storage system holding 200TB, which after 8 years was no longer sufficient. Joakim, the Technical Director, had already been reviewing options to improve the availability of files, and more generally the efficiency of the team's workflow, particularly as the number of freelancers was growing. Remote working became the new norm in 2020, which brought forward the introduction of a new system to efficiently tackle this new work setup. The tighter schedule was accompanied with a reduced budget considering the uncertain business climate, meaning the new setup needed to come within a £10,000 investment.

The team at Lonelyleap were already acquainted with Synology as the branch in New York used a DS3018XS as part of their backup infrastructure. Importantly to Joakim, they knew that beyond the hardware and software solutions, they could rely on Synology technical support: a software related issue they had once experienced had received immediate attention and to their surprise, a custom tweak had been provided within 24 hours!

Lonelyleap now introduced Synology Drive as the backbone of their infrastructure to provide both file synchronisation to remote workers, and disaster recovery between their sites in London and Stockholm. All this was to be powered by the SA3400, the DS1621xs+, as well as smaller DS720+, one at each employee's home.

The core of the infrastructure is powered by a SA3400 with 48TB in a RAID 5. As the system is used for live editing and by production stations when staff are onsite, it connects over a bonded 20GbE connection, and makes use of an SSD cache with Synology's SNV3500-400G NVMe SSDs through an E10M20-T1 PCIe card to boost performance. The SA3400 also provides faster file access for employees onsite as it synchronises with a Swedish-based Synology system DS1621xs+, which powers Synology Drive. Whilst Joakim's logical choice would have been to synchronise the team's workstations directly with the SA3400, the limited bandwidth on the UK site lead him to make use of Synology Drive ShareSync and keep two Synology servers in sync between London and Stockholm. This package provides real-time synchronisation between the SA3400 and the DS1621xs+ based in Stockholm, where the network upload link is much faster: it's from this second unit that an employee's DS720+ or workstation synchronises to.

In addition to acting as the host for Synology Drive, synchronising with employee workstations as well as the SA3400 server in London, the DS1621xs+ also acts as a Disaster recovery site, providing additional redundancy on top of their LTO setup for archiving. Due to the better bandwidth, the team also have the possibility to link up the European operations with the DS3018xs located in New York via ShareSync should they ever wish to do so in the future.

To ensure simple access to files and the best productivity, editors have the option of accessing files via Synology Drive directly on their laptop, or via their DS720+ which acts as a local cache from the central DS1621xs+, synchronising any changes back automatically. Importantly for the team, this can be done via AFP which Synology DSM supports, and is their preferred method of access to this day. Since the speed of transmission is key, Lonelyleap allow for automatic transcoding of raw footage to lower bitrates on which edits can be done locally, before being synced back and applied to the original file in full resolution. 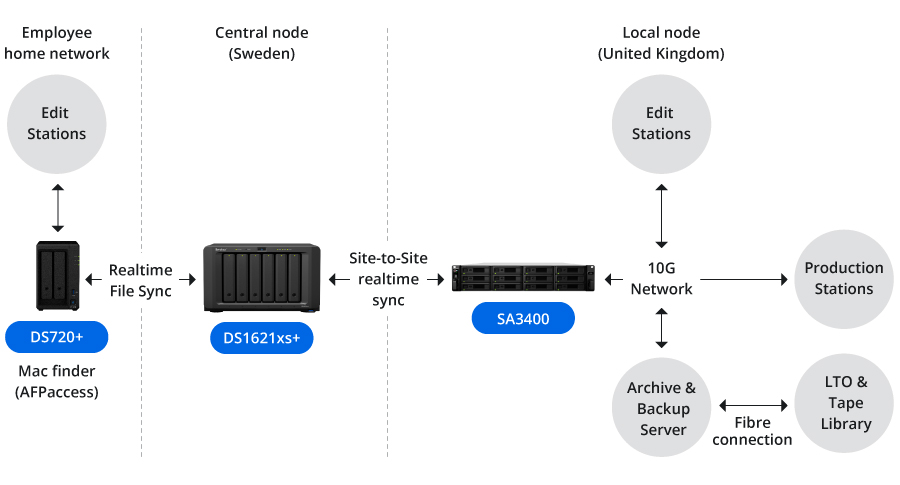 In a difficult context brought about by a pandemic and lockdowns, Synology were able to solve a complicated equation: bring in a modern, efficient and reliable infrastructure to power remote work for their staff, ensure resilience with effective backup and disaster recovery methods, and achieve this with a much tighter budget.